The Boston Marathon: My 2016 Experience and Why This is the Only Run that Really Matters!

When I was 6 or 7 I lived in the San Francisco Bay area.  My father was busy as a mechanical engineer working as a mining consultant and traveling the world over helping with preventative maintenance of large equipment.  Unfortunately, that left very little time for “personal preventative maintenance” and he was starting to gain weight.  I should say that he looks as good as he ever has at 79, and seems to be pretty healthy and happy at present! However, in 1975 he was fighting the age-old battle of man vs. food, and taking a beating!  He would ofttimes go running after work, and invite me to come along!!!  I fell in love with the sport during those jogs with my Dad!

Me and My Dad

I clearly remember going to see the movie, “Running”, starring Michael Douglas with my Dad, and loving it !  I also recall taking off on a run with my Dad and 3 older siblings around a tailings pond at a mine in Northern Quebec before my 9th birthday, and being the only one to finish!!!  For a little guy, I had a pretty serious obsession with running!!  (I tend to be passionate about things)  I also remember having a list of life goals, which included “Playing Linebacker in the NFL”, and adding “Winning the Boston Marathon” to it!  Although I happily retired from football after high school, and winning Boston is never going to happen, I did add completing this historic race to my list of accomplishments on Patriots’ Day this year!  So, why the Boston Marathon??  What makes this marathon so great that crossing the United States (or the world for many competitors) is just a minor inconvenience compared to the honor of toeing the line in Hopkinton, MA with 32,000 of your closest friends.

It was the largest registration area I had ever seen…..31800 and up, really??

The Boston Marathon is the oldest race of its kind in North America, and the longest running annual marathon in the world!!  The marathon was re-instituted in 1896 at the first modern Olympics game in Athens, Greece to commemorate the pseudo-historic run of Philippides from the plains of Marathon to Athens to announce the victory of the Athenians over the heavily favored Persians before collapsing in deaths’ grip….Boston could see the symbolism in the victory of the United States over the heavily favored British a century before and so they had their own version 1 year later, and every year since….119 times!!!

Crammed up and waiting for the starting gun!!!

This Race has history!!  You can feel the symbolism of sacrifice with every step. You should definitely get there a few days early and visit The Lexington Green, Concord, The Old North Church,  and Bunker Hill. Places where people risked their lives and died to make the United States such a singular place in the history of human freedom since the beginning of time!!  I think the only reason I do endurance sports is because we live in a world that is so materialistically easy so much of the time!  The wealthiest Bostonians of yesteryear had silver candlesticks….We have electricity.  Where they had the finest carriage…..We have the automobile.  Where they had nothing but grains, meat and milk during the long winter….We can get the freshest fruits and vegetables all year long.  Veganism is truly a modern day miracle!!

The Old North Bridge at Concord, and the finish line of the toughruck, an event to support military families in times of crisis. 26.2 miles with a pack!  But you get a Boston Marathon finishers medal and certificate upon completion!  It is on the Saturday before the race.  Why not do both??  www.toughruck.org

Many of the locations of the early revolution are truly sacred…you can feel their significance as you walk and ponder….

I like the fact that you have to qualify to get in.  It lends the race a sort of mystique.  I qualified in 1999, but had no money to make the pilgrimage.  So when I qualified in 2015, I couldn’t say no, I had to check the race off my bucket list!  I actually ran the fastest marathon of my life to qualify, I would have got a spot if I was 29, so at 45 a 2:53.00 is pretty quick.  The only reason I signed up was because my daughter wanted to run a marathon, I spent most of the month riding my bike, and actually did 30 miles the evening before the race!!  If I ever go back to Boston, I am definitely bringing my bike!!  If you can’t qualify, there are charity spots available.  I am not sure how you get them, but almost everybody who was reasonably fit that I talked to in Boston had done the marathon at least once.  More than a third of the spots are for non-qualifiers!!   Therefore, you have no excuse!!!

There are a half a million spectators on the course!!!  Wow, can you imagine that many people coming to see you!!!  (OK, maybe not just you)  but it is really cool!  I was suffering over the last few miles and really just wanted everybody to shut up….but it wasn’t going to happen.  I picked up a beautiful rose for my wife along the course, and had to stop and give a lovely young lady a kiss, (on the cheek, of course), during the “kissing mile”.  I probably wouldn’t have stopped, but I certainly wasn’t going to set a PR, so, I decided that I should go ahead and live the entire experience!  You get a little peace and quiet between towns for the first few miles, but the crowds build steadily and before long they are 6 deep on both sides of the road as far as you can see!!  Be prepared, because they are very loud!! 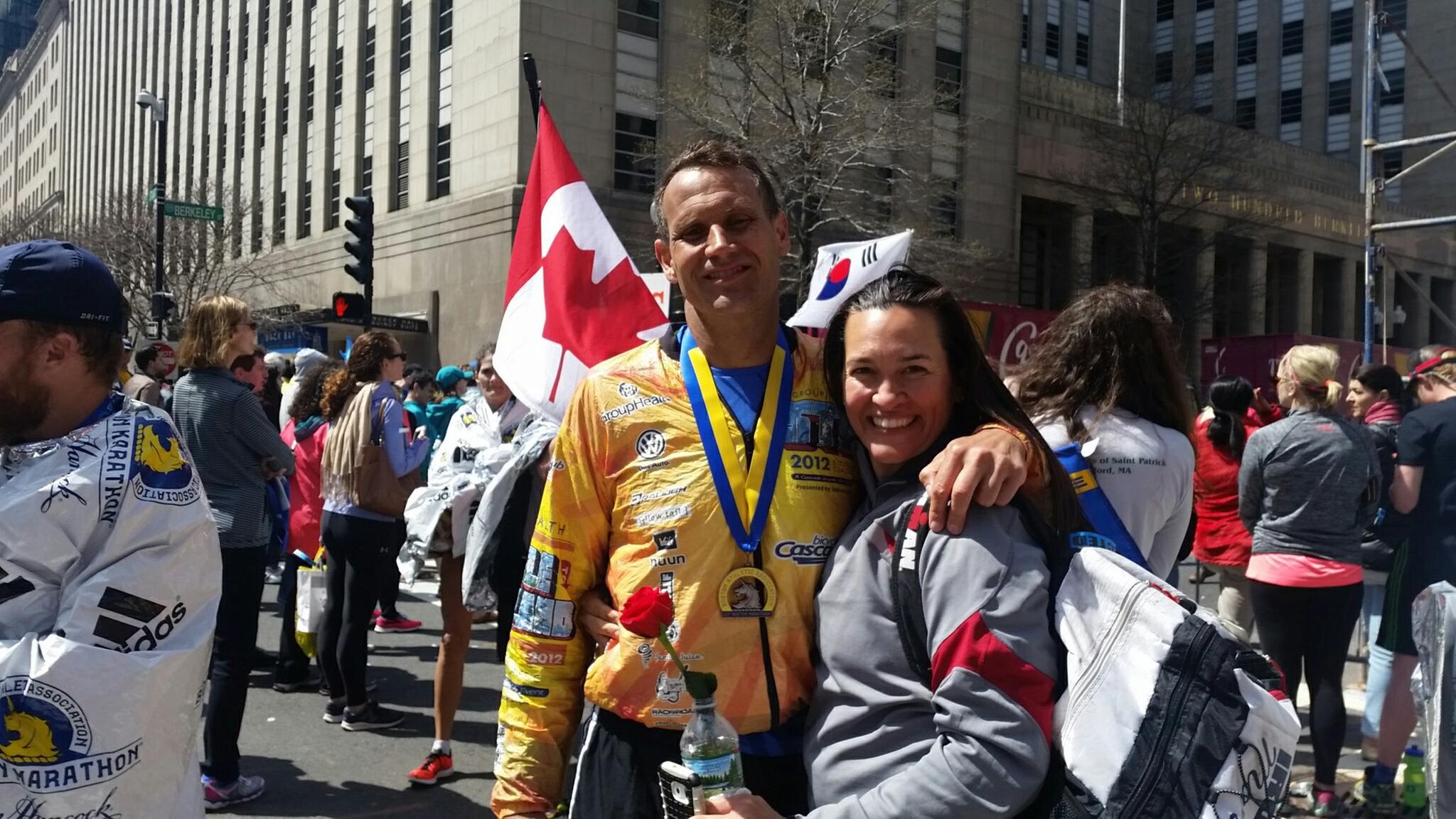 Enjoying the finish line festivities.   Notice the rose I picked up at mile 20 and carried to my beautiful wife patiently waiting for her minuteman!!

The city of Boston gets behind their marathon.  There are runners everywhere in the days leading up to the race, and the locals seem to love it!!  They take pride in the running of the race.  My wife and I went to church near Hopkinton the day before the race, and there were 4 runners visting the same small church that we were.  Members of the congregation even helped my wife get to the starting line the next morning!!  We reserved our hotel late and so we stayed near the starting line, instead of downtown!  It was really nice, and we saved a ton of money!  I would definitely recommend staying out in the suburbs and making the quick trip downtown by public transit or rental car when needed!

So if you are thinking about doing one of the “major marathons”, I really think that you should start where it all began, and run like a scared Redcoat for Boston Harbor. Enjoy the rolling hills and net elevation drop, as you remember your liberty and freedom where it all began in Boston, Massachusetts.

On Patriots day, the 3rd Monday of April, they re-enact the battles of Lexington and Concord…you won’t see it because you are running a different route to Boston…but you will see a few Redcoats and Minutemen as you explore the early events of The Revolution in the days before the race!

One thought on “The Boston Marathon: My 2016 Experience and Why This is the Only Run that Really Matters!”